A web site consist of many more files than just the HTML documents we have been generating up to now: css files, javascript files, image files, font files, ...

The asset pipeline is rails' way of preparing theses files for publication using the current state of knowledge regarding web performance.

By referring to this guide, you will be able to:

Fork the example app 'recipes' and try out what you learn here.

What do we mean by 'web performance'? From the viewpoint of one user, the crucial value is the time it takes from requesting a page (by clicking a link or button, or typing in an URL) to having the page displayed and interactive in your browser. We will call this the 'response time'.

From the publishers point of view it might also encompass the question of how many users you can serve (with acceptable response time) on a given server. If you look at the question of how to serve more users in case of more demand you enter the realm of 'scalability'. This is a more advanced question that goes beyond the scope of this guide.

If you have never studied this subject you might still have an intuition about where performance problems come from. Many beginners are fascinated by details of their programming language like: will using more variables make my program slower? or is string concatenation faster than string interpolation?.

These 'micro optimizations' are hardly ever necssary with modern programming languages and computers. Using Rails, Postgres and a modern hosting service you will have no trouble serving hundreds of users a day and achieving adequate performance for all of them.

Trying to 'optimize' you code if there is no problem, or if you don't know where the problem is, will make your code worse, not better.

Donald Knuth stated this quite forcefully:

"The real problem is that programmers have spent far too much time worrying about efficiency in the wrong places and at the wrong times; premature optimization is the root of all evil" -- Donald Knuth

Only after you have measured the performance factors that are relevant to your project, and only after you have found out which part of the system is causing theses factors to go over the threshold of acceptable values, only then can you truly start to 'optimize'.

The "exceptional performance" group at Yahoo published the browser addon yslow in 2007. It measures performance and displays the timing of the different HTTP connections as a "waterfall graph": 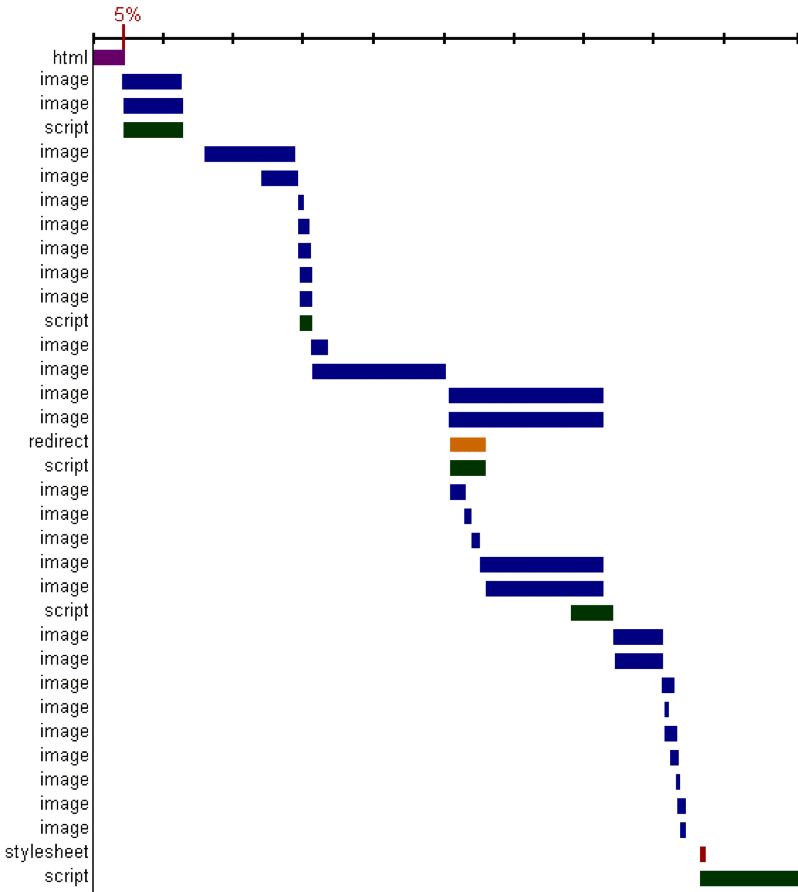 Each bar is one resource being retrieved via HTTP, the x-axis is a common timeline for all. The most striking result you can read from this graph: the backend is only responsible for 5% of the time in this example! 95% of time is spent loading and parsing javascript and css files and loading and displaying images!

This graph was later integrated into the built in developer tools of several browsers, and into the online tool webpagetest.

Yahoo first published 14 rules for web performance in 2007, based on the measurements back then:

Even with changing browsers and protocols some of these are still very valid today. But as a web developer you should always keep an eye on the changing landscape of web performance! These rules and their priority will change!

2 How Rails helps with Performance

To comply with rule 1 "make fewer HTTP requests" there now exist a lot of tools. The Rails asset pipeline was introduced in Rails 3.1 in the year 2011.

I lets you use all theses tools automatically:

There are two main folders:

The second folder will be served by the web server directly, without going through the Rails stack

The Asset Pipeline works differently in different Rails Environments. There are three environments that exist by default:

How each envirnoments behaves is configured in files in config/environments/*.rb.

The development environment is used by default on your machine. If you deploy to heroku or to another hosting server, production will be used there.

2.2 Rails Environments and the Asset Pipeline

In development the asset pipeline will not write files to public/assets. Instead these files will be created on the fly, and not be conactenated. The two lines in your Layout:

Will each result in a number of links. Here an example from a real project:

When you deploy to production, you deployment process will run rake assets:precompile, which generates the files in public/assets, including public/assets/manifest-md5hash.json.

You can also try out the production environment on your own machine:

The filenames mentioned in the last chapter all contain a part that seems random:

Where do the extra characters come from and what do they mean?

These extra characters are the "fingerprint". It is computed from the full content of the file. If only one byte changes in the file, the fingerprint will be different.

This enables a neat trick with the expiry of the file: You can set the expiry time to infinite, every browser can save the file forever and never try to reload it. If the contents of the file change, a new file with a new fingerprint in the name will be generated, and the HTML-page will link to that file.

This way we avoid one the the two hard problems in computer science: cache invalidation.

When you are working on the frontend of your app, fiddling around in views and stylsheets, it may be helpful to immediatly see the changes you make reflected in the browser.

To achieve this in Rails you can use guard. Add three gems to the development-section of your Gemfile:

This will create a Guardfile in your main directory.

Now you can start bundle exec guard in a separate terminal window.

Now stop and start your webserver, reload your app in the browser, and change a stylesheet or view to see it in action.

The window with guard running needs to stay open, it will look like this:

The asset pipeline handles assets that are added by developers during development. Images uploaded by users in production are handled by activestorage.