Node.js is just a javascript interpreter with a very small library added. With node you build your web server from scratch.

After working through this guide you should

Node.js was originally written by Ryan Dahl in 2009 as a combination of two pieces of software that already existed:

To this he added a library written in Javascript. In 2010 npm was added as a package manager for Javascript Libraries.

In 2017, according to openhub the node projects consist of:

So v8 is the biggest part of node:

You write your program in Javascript:

and run it with the node command:

You can also use node interactively:

Node does not use ES6 modules! node packages are installed by npm into a folder node_modules. You can also write your own:

You have worked with Javascript and asyncronous programming before.

If this code runs in the browser, the output on the console will be:

PHP and Ruby on Rails have the same basic processing model. It is either implemented with threads or with processes.

Apache comes with a module server_status that displays the processes/threads and their status on a webpage. Here an example: 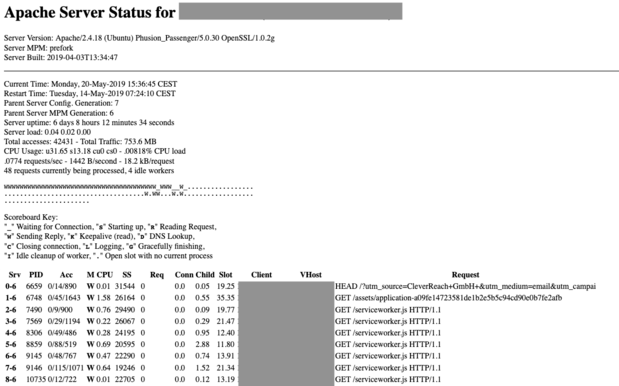 If your server runs into trouble you can use the server_status for debugging.

Using syncronous I/O the program code will look something like this:

As each thread comes with a fixed overhead of memory demand, you can only start so many threads on a given machine. You configure this in the web server configuration, e.g.

Node has a completely different model:

Doing asyncronous I/O is implemented using callbacks in Javascript, and will look something like this:

If this is the whole program, the main thread will become free after printing out second. It will pick up something else to do from the event queue. Much later, when the data from the file has been loaded, it will find the callback funktion on the event queue, and finally reach third. 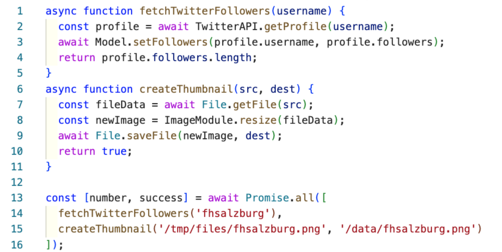 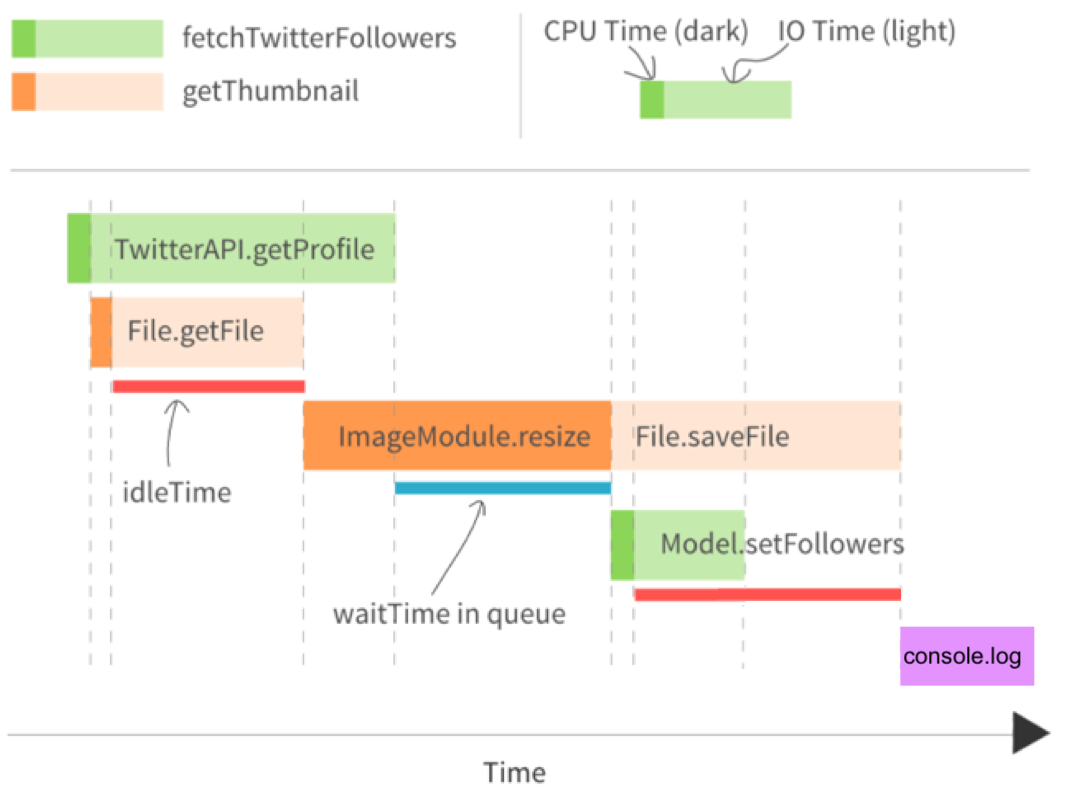 The node process model helps with I/O-bound applications: If your app is I/O-bound, the event loop will be able to serve many requests, while other threads handling the acutal I/O will run on other kernels

If one aspect of your app is CPU-bound it will monopolize that kernel, (other) requests cannot be served. Therefore node and is not well suited for CPU bound applications.

A Node app by necessety contains a lot of asyncronous code. The traditional way of writing it, is the "callback" style:

This leads to "callback hell", when callbacks have to be nested deepply, and the order of the code lines is in no way connected with the order they are executed in.

There have been several attempts to find a more readable alternative:

The last two optinos seem to be the winners (in 2017): promises are a part of ES6, and are available in both browsers and node now. In node you can use a "promisified" version of the node standard library with mz:

Async functions are defined in ES8 and are usable in browsers, but not in node yet. There Syntax will be something like:

Read the file. After the whole file has been read, send it:

Better: connect a stream reading the file to the stream that is the HTTP response:

.pipe() takes care of listening for 'data' and 'end' events from the fs.createReadStream(). This code is not only cleaner, but now the data.txt file will be written to clients one chunk at a time immediately as they are received from the disk.

Using .pipe() has other benefits too, like handling backpressure automatically so that node won't buffer chunks into memory needlessly when the remote client is on a really slow or high-latency connection.

From the stream handbook