This guide will give you an introduction to the security features included in Ruby on Rails, how to use them, and how to mess up in spite of all the help the framework is giving you.

By referring to this guide, you will be able to:

You can fork the code of the example app. This app is full of security holes. While reading this guide you should work on the app and fix those holes one by one.

Later on this Guide will follow the OWASP Top 10 from 2017 to discuss security features of Ruby on Rails. But first a word of warning:

Rails offers a lot of security features. But all those clever features cannot save you from yourself.

In the example app all the passwords are displayed on "/users". If you as a programmer decide to do that, no framework can prevent it! 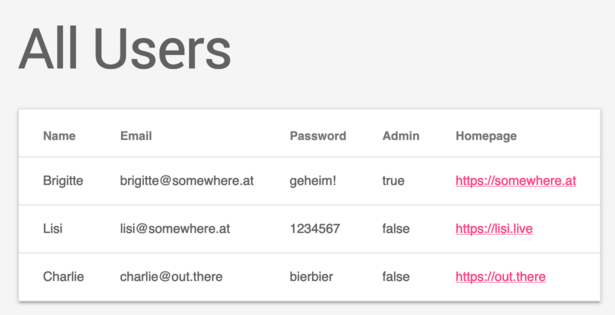 Let's use this as an example of how to fix a security problem once you've found it: First we write a test for the problem: rails g integration_test security

When we run this test it fails, because right now passwords are displayed:

Now we change the view to not display the passwords any more. We can run the test to make sure we succeeded.

Injection flaws, such as SQL, NoSQL, OS, and LDAP injection, occur when untrusted data is sent to an interpreter as part of a command or query. The attacker's hostile data can trick the interpreter into executing unintended commands or accessing data without proper authorization. OWASP Wiki

ActiveRecord will protect against SQL-Injection if you use methods like find and where without string interpolation.

But if you use string interpolation to build up SQL queries, you open up your application to injection attacks. An example that is vunerable:

If a malicious user enters ' OR ''=' as the name parameter, the resulting SQL query is:

As you can see the SQL Fragment was incorporated into the SQL query before the string was handed to ActiveRecord.

So the resulting query returns all records from the projects table. This is because the condition is true for all records.

To test for SQL Injection you can also use an integration test. Check if the result-table has the right number of rows.

ActiveRecord will use prepared statements by default, unless you configure it not to do that.

Rails comes with basic built in functionality to handle authentication:

For most real world projects you will be using a gem:

We discussed using this in the chapter on Rails Authentication.

Friendly reminder: this is how you test if a user can be created:

Many web applications and APIs do not properly protect sensitive data, such as financial, healthcare, and Peronally Identifiable Information ... Sensitive data may be compromised without extra protection, such as encryption at rest or in transit, and requires special precautions when exchanged with the browser. OWASP Wiki

4.1 Encryption in the Database

In Rails you can use the attr_encrypted gem to encrypt certain attributes in the database transparently. While choosing to encrypt at the attribute level is the most secure solution, it is not without drawbacks. Namely, you cannot search the encrypted data, and because you can't search it, you can't index it either. You also can't use joins on the encrypted data.

4.2 Removing from the Logfile

By default, Rails logs all requests being made to the web application. You can filter certain request parameters from your log files by appending them to config.filter_parameters in the application configuration. These parameters will be replaced by "[FILTERED]" in the log.

Provided parameters will be filtered out by partial matching regular expression. Rails adds default :password in the appropriate initializer, which will take care of password and password_confirmation.

4.3 Ensuring that HTTPS is used

In the appropriate environment(s) force ssl:

This will do three things:

See this blog article for more details on configuring this

A XEE vunerability in nokogiri was fixed in 2014, but another was found in 2017, and is not completely fixed yet.

Use a service like snyk to learn about vunerable dependencies.

Restrictions on what authenticated users are allowed to do are often not properly enforced. Attackers can exploit these flaws to access unauthorized functionality and/or data, such as access other users' accounts, view sensitive files, modify other users' data, change access rights, etc. OWASP Wiki

Use all lines of defence on the server to restrict access:

6.2 check user roles and premissions in every controller

The simplest way is to use current_user to control access to models. Instead of simply loading data:

For more complex setups with different roles that have different permissions use a gem like cancancan which will let you define access in a declarative way and give you an authorize! method for controllers:

6.3 use UUIDs instead of bigint as id

If you need to have a resource that is available to anyone with the URL (think google docs, doodle), but do not want users to be able to enumerate all possible URLs:

Instead of serial/autocincrement  use of UUID

In postgresql you can use the extentions pgcrypto or uuid-ossp

Rails can handle all this for you:

now your urls will be harder to enumerate:

Browsers restrict cross-origin HTTP requests initiated by scripts. For example, XMLHttpRequest and the Fetch API follow the same-origin policy. This means that a web application using those APIs can only request HTTP resources from the same origin the application was loaded from, unless the response from the other origin includes the right CORS headers. 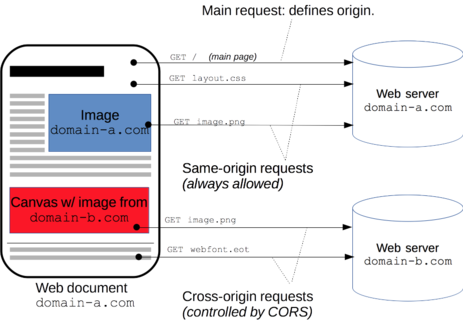 (Text and Image originally from MDN by many contributres is licensed under CC BY-SA 2.5

In the most simple case, when doing a cross-origin request:

If you try to fetch a ressource cross-origin and no is set, an error occurs: 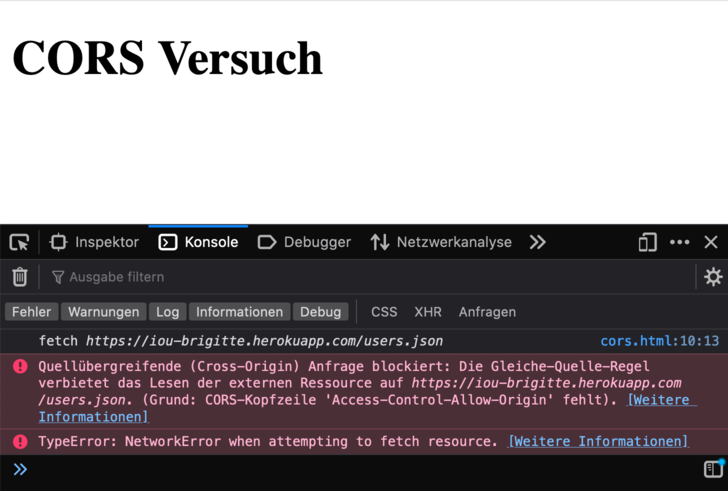 After setting the right Headers for the HTTP Response, the request goes through: 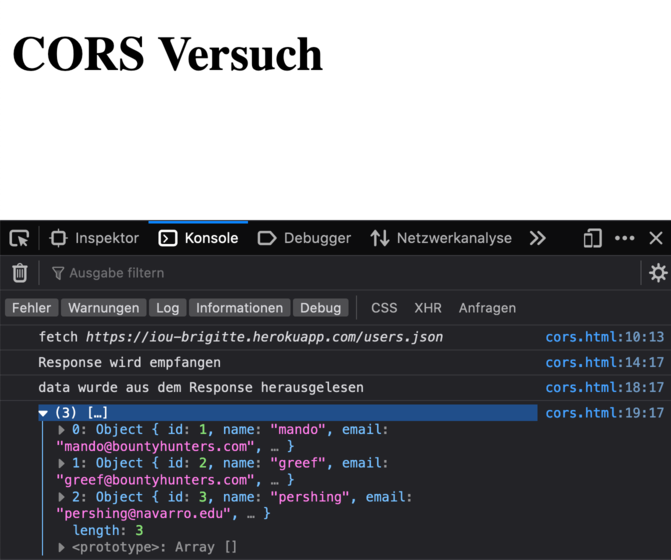 In Rails you can use the rack-cors gem to set the Header in middleware:

The configuration is done in an initializer:

In this example get-requests are allowed for all origins, while using the full api is only allowed for three specific domains.

Security misconfiguration is a result of insecure default configurations, incomplete or ad hoc configurations, open cloud storage, misconfigured HTTP headers, and verbose error messages containing sensitive information. Not only must all operating systems, frameworks, libraries, and applications be securely configured, but they must be patched/upgraded in a timely fashion. OWASP Wiki

This is espacially relevent if you are running your own virtual machine:

The files config/database.yml and config/secrets.yml should not be added to the repository - unless you extract out all the secrets into environment variables (as a 12 factor app)

The master key is never stored in the repo.

By default, this file contains the application's secret_key_base, but it could also be used to store other credentials such as access keys for external APIs.

The credentials are accessible in the running Rails app via Rails.application.credentials.

For example, with the following decrypted config/credentials.yml.enc:

If you want an exception to be raised when some key is blank, use the bang version:

XSS flaws occur whenever an application includes untrusted data in a new web page without proper validation or escaping, or updates an existing web page with user-supplied data using a browser API that can create HTML or JavaScript. XSS allows attackers to execute scripts in the victim's browser which can hijack user sessions, deface web sites, or redirect the user to malicious sites. OWASP Wiki

In Rails 5.2 and later you dan configure a Content Security Policy for your application in an initializer. You can configure a global default policy and then override it on a per-resource basis.

This automatically forbids all 'unsave-inline' script: <script>-tags in the html code and event-handler-attributes like <button onclick=...>.

To allow certain <script>-tags in your code you can give them a "nonce":

This must be the same nonce given in the CSP:

If you want to handle violation reports, you need to set up a model, controller and route as described here.

8.2 Escape for the correct context:

This escaping is not apporpriate for attributes:

An attacker can insert a space into the style parameter like so: x%22onmouseover=javascript:alert('hacked')

To construct HTML Attributes that are properly escaped it is easiest to use view helpers like tag and content_tag:

In the context of JSON you need to use json_encode:

When building a JSON API use jbuilder or active_model_serializers as described in chapter APIs.

See XSS in the brakeman documentation

Brakeman will warn about Unsafe Deserialization

Components, such as libraries, frameworks, and other software modules, run with the same privileges as the application. If a vulnerable component is exploited, such an attack can facilitate serious data loss or server takeover. Applications and APIs using components with known vulnerabilities may undermine application defenses and enable various attacks and impacts. OWASP Wiki

There are several tools that check for vulnerabilities in dependencies:

When using script-tags to include javascript (e.g. jquery, bootstrap from a cdn) use Subresource Integrity checks to prevent man in the middle attacks using your javascript.

(This example from jquery also includes the CORS attribte crossorigin set to anonymous. This way no user credentials will every be sent to code.jquery.com).

Insufficient logging and monitoring, coupled with missing or ineffective integration with incident response, allows attackers to further attack systems, maintain persistence, pivot to more systems, and tamper, extract, or destroy data. Most breach studies show time to detect a breach is over 200 days, typically detected by external parties rather than internal processes or monitoring. OWASP Wiki

This is really outside the scope of the backend framework.

This security problem used to be No 8 on the list, but was no longer listed in the 2017.

First use GET and POST appropriately. Secondly, a security token in non-GET requests will protect your application from CSRF. Rails can handle this for you:

To protect against all other forged requests, we introduce a required security token that our site knows but other sites don't know. We include the security token in requests and verify it on the server. This is a one-liner in your application controller, and is the default for newly created Rails applications:

This will automatically include a security token in all forms and Ajax requests generated by Rails. If the security token doesn't match what was expected, an exception will be thrown.

Note that cross-site scripting (XSS) vulnerabilities bypass all CSRF protections. XSS gives the attacker access to all elements on a page, so they can read the CSRF security token from a form or directly submit the form.